Applying phosphorus fertilizer to soils that lack available phosphorus for our crops - of course - it's a no-brainer.

But is this really the solution?

Probably the first deliberate use of phosphorus fertilizer began in biblical times. People noticed that the best grapes grew in the old battlefields. The most productive vineyards were planted over the unmarked graves of the fallen and fertilized by their bones.

Bones and bone meal continued to be used as a phosphorus fertilizer by farmers through the ages and are still used today by organic growers. However, the bone meals are slow to release their treasure.

The first phosphate fertilizer was patented in 1847 by Mr. James Lawes. He treated bones and bone meal with sulphuric acid. His experiments, all conducted on turnip crops, showed turnips fertilized with bone meal treated with acid did way better than those fertilized with regular bone fertilizers.

A Brief History of Mycorrhizal Fungi

About 400 million years ago aquatic plants made their first step onto land. Fortunately, fungi had already been hard at work for a very long time and had worked a few things out - like how to get nutrients out of bedrock. Plants immediately saw a potential partnership with the fungi and offered sweet sugar in exchange for their help. The marriage was consummated and they've been together ever since.

About 400 million years later, in 1881, mycorrhizal fungi were discovered by Professor AB Frank. While trying to find ways to increase the truffle harvest he noticed all the healthy trees had roots encased in fungi. He suggested they were not problems but symbiotic partners.

We now know that this partnership between fungi and plants is so pervasive it is called the universal symbiosis. Over 95% of plants form mycorrhizae. Ironically, the turnip is one of few non-mycorrhizal plants.

Guess what mycorrhizae seem to be best at. They break down phosphorus compounds into forms available to plants and bring them to the plant.

In an effort to reduce the damage caused by phosphate runoff and resulting algae blooms in lakes, a number of local, state, and provincial governments have banned phosphorus fertilizer for lawns.

Why is Phosphorus So Important?

Phosphorus is one of the big three macronutrients plants get from the soil. It is present in all DNA and RNA. Adenosine triphosphate, also known as ATP, a substance fueling nearly every cellular process, contains phosphorus. Next to calcium it is the biggest component of our bodies.

Our most important use of phosphorus is as fertilizer, but it is also used in weapons, the herbicide glyphosate (aka Round Up), baking powder, and detergent among other things. We'll use it all in 345 years - that is if we mine every last bit. However, peak phosphorus is just 30 years away with most reserves being depleted within 50 to 100 years.

In an effort to reduce the damage caused by phosphate runoff and resulting algae blooms in lakes, a number of local, state, and provincial governments have banned phosphorus fertilizer for lawns.

What is it About Phosphorus That Makes it Challenging for Plants?

Phosphorus is an extremely reactive element never found free in nature. The phosphorus ions used in fertilizers are negatively charged. The first thing phosphorus does when it hits the soil is draw positively charged ions to it. These turn into new insoluble compounds, and these compounds do not move in the soil. They sit there, insoluble and tantalizingly out of reach of plant roots.

A review of the scientific literature reveals that most, as in 75 - 95%, of the phosphorus fertilizer applied to crops, is not taken up by the plants. It will mostly stay in the soil. However, significant amounts are washed or eroded away into adjacent streams where they wreak havoc with aquatic systems causing large algae blooms killing lakes.

Despite this, our crops still don't have adequate phosphorus. They may be surrounded by reserves of phosphorus, but these reserves are either inaccessible or insoluble so not suitable for plants to uptake.

Fungi or Fertilizer - The Search For a Silver Bullet

Lack of available phosphorus for plants is often the limiting factor for plant growth. Our usual solution is to apply phosphorus fertilizer even though up to 95% is going to waste.

We are in the habit of seeing soil as an inert bank of nutrients. Add nutrients, you get fertile soil.

Soil is not that simple and scientists are now seeing that soil is a complex living and fragile system essential to nutrient cycling, home to trillions of bacteria, fungi, protists, and others, all feasting, living, and dying largely unseen beneath our feet.

Most of the soil life can't be seen without a pretty decent microscope. Most of them do their thing in a complex living soil but put them in a petrie dish and ... we have to admit we have only the vaguest idea of what is going on in the soil.

The soil food web is composed of trillions of microbes and larger creatures representing thousands of species. Nutrient cycling, keeping elements plants need in the system close to plants, is one of their main jobs. This USDA diagram gives a sense of who is who. 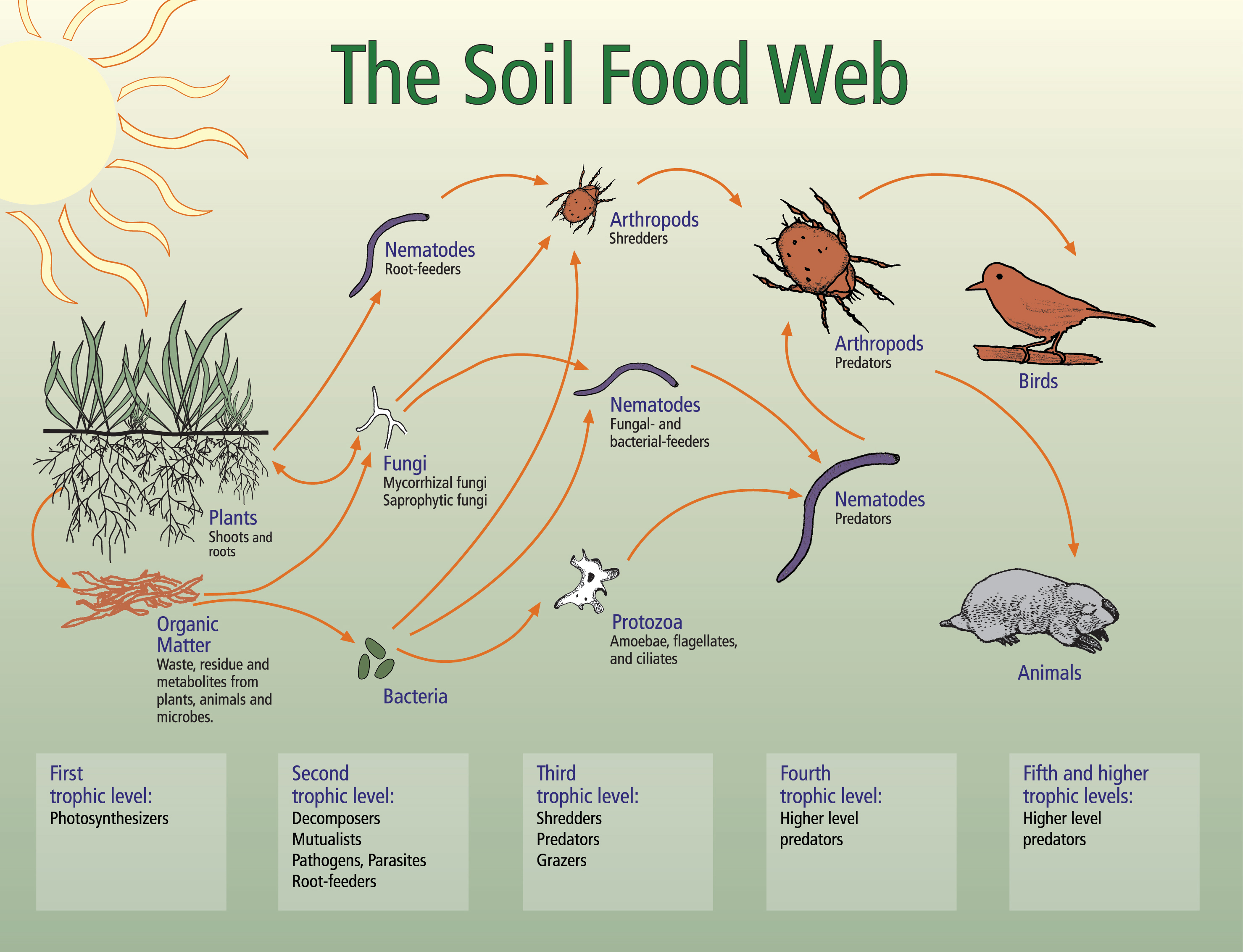 If the system is in balance all is well. However, if one of the classes of life is either over, under, or not represented at all problems develop.

The knee jerk response is soil chemistry tests to find out which nutrient is needed. What we really need to do is use our microscopes to see what part of the food web is out of whack.

In soil with a fully functional food web, including bacteria, decomposers, and mycorrhizal fungi, the phosphorus needs of most plants will be met. Part of it will come from the work of bacteria and decomposer fungi in breaking down decomposing residues. The balance will be supplied by mycorrhizal fungi as they exude acids and enzymes that dissolve phosphate compounds in soil and rock into plant usable elements and then transport these minerals back to the plant roots.

Unfortunately, many of our normal farming and gardening practices damage this web of life, and mycorrhizal fungi are especially at risk.

Mycorrhizal fungi are not a silver bullet but they are often a missing or underrepresented component of the soil food web when phosphorus uptake is a problem.

These fungi, symbiotic partners with 95% of all plants, expand the surface area of plant roots by 10 to 1000 fold. They make the untapped nutrition in the soil available to the plant. Their forte is retrieving phosphorus resources and converting them into a form available to plants.

In the last 15 years or so we've developed methods of propagating these fungi so that they are available to add to our farm fields and gardens. If they are added with care, and changes are made in the ways we garden, the fungi can remain in place indefinitely with just one application.

Given that we've routinely added more phosphorus fertilizer than the plants take up for some time there are phosphorus reserves in most soils. The issue is whether the plants can access and make use of it.

If mycorrhizal fungi are absent or underrepresented in your soil bringing them back to health or reintroducing them into your farm or garden, maybe just be the trick you need - unless of course you're growing turnips.

Mycorrhizal fungi are not the silver bullet, they're just one of the myriad of organisms we need to support. And sometimes you might just actually need phosphorus fertilizer. However, if you've got your fungi in place, at least you won't waste it.